A new standard for modern forestry

Having cut the RPM’s to half, JPS have set a new standard for modern forestry operations by introduced a saw unit with unrivalled productivity and operating economy – Reduced fuel consumption, less heat generation and fewer split logs are just some of the real benefits.

With the R-technology, JPS have turned traditional concepts on their head. By re-evaluating the design, JPS have challenged and improved former technologies in several ways. Instead of operating the saw motor at its maximum limits, which leads to reduced efficiency and high heat generation, JPS have lowered the RPM’s to half and increased the torque by using a larger sprocket.

With a lower rotational speed and less heat generation, the power produced by the hydraulic system is used more efficient. Instead of being lost as heat generation, a greater part of that power is now used to drive the saw unit. Validated test have shown that the R-technology can reduce fuel consumption when harvesting by up to 15%. The fuel savings alone make the investment payback-time less than a year.

By not pushing equipment to the limit, the service life is extended which means even lower operating costs, fewer disruptions and more productivity. The chain speed has been maintained by using a larger drive sprocket with 20 or 22 teeth. The large radius also reduces sprocket wear out to a minimum.

Additionally, as the sprocket is reversible, meaning the sprocket is double sided with two rows of teeth, you simply turn it over if needed. JPS therefore offers an impressive 5,000 hour warranty against wear-out of the sprocket. The smart design also enables a uniform and smooth cutting speed when cutting logs.

The uniform chain speed and the more rigid saw bar make cutting more efficient. When tested, the JPS saw unit cuts up to 40% faster than its competitors. One of the major benefits of faster cutting are significant less split logs.

The smart design makes it possible to use a wider saw bar tail with a more rigid saw bar, resulting in reduced oscillation. The rigid structure of the saw bar enables the rails to be made stiffer without any risk of cracking. The rigid saw bar has a 3-4 times stronger mounting over conventional guide bars. The unique bar mount can be unfastened with a single screw and it is therefore easy to demount and turn.

The JPS sawing unit has also been prepared for stump treatment in all bar lengths.

In short, the R-technology offers unrivalled productivity and operating economy with a significantly reduced total operating cost that far outperforms other systems. The JPS saw unit increases productivity, reduces fuel consumption and cuts down on unwanted split logs – in a nutshell, the technology is the key to be successful in modern forestry operations business. 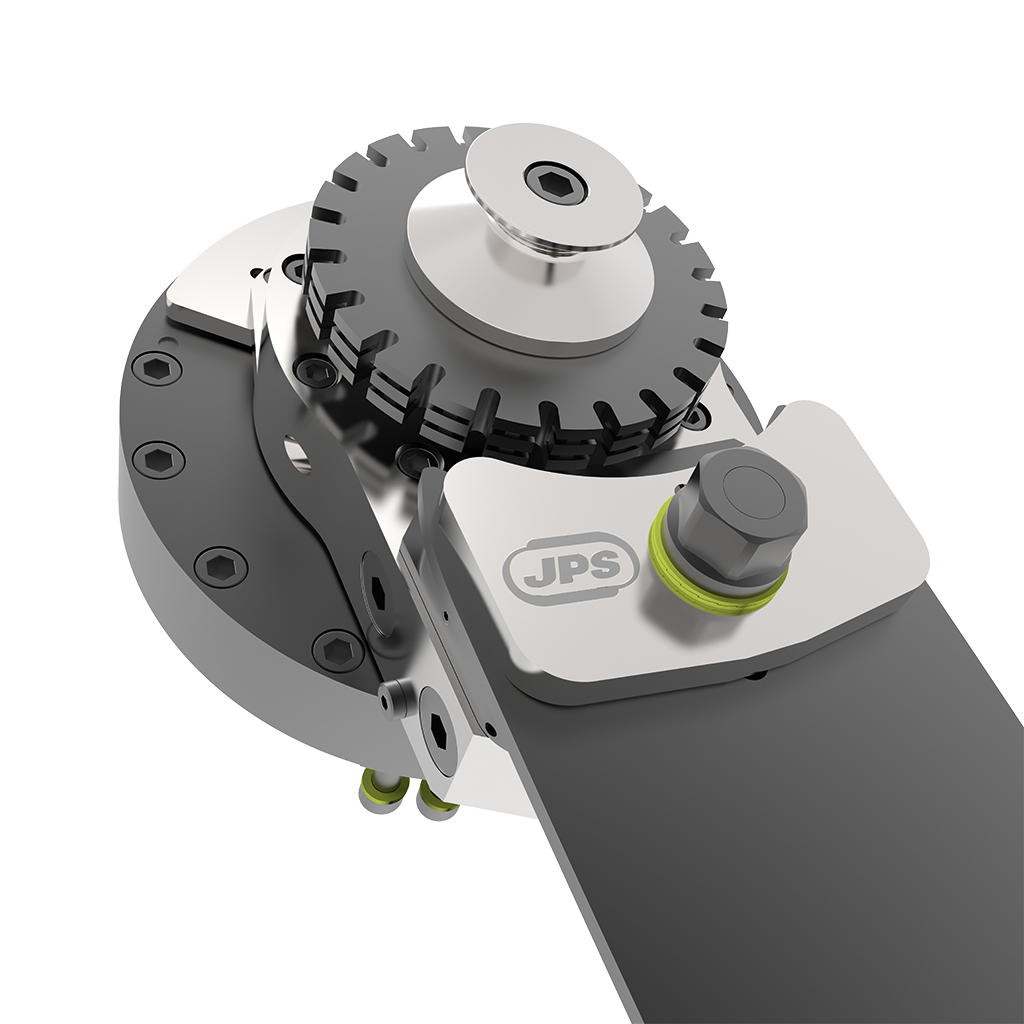 When developing the R-technology, JPS have also developed a completely new hydraulic rotary actuator that replaces the traditional saw bar cylinder. The actuator consists of only three parts and therefore offers maximum reliability while the maintenance requirements are minimal.

The unique design is the central part of 2nd gen saw units from JPS as it serves as the mount for the saw unit in the harvester head. The motor is located on one side, and the bar mount on the other. This means that they can be dismantled independently. The motor can be left untouched when replacing the bar holder, and vice versa to reduce down time.

The rotary actuator features hydrostatic bearings to enable unhindered operation on a fine oil film, giving it close to infinite bearing life. With integrated dampening at the end of travel in each direction, mechanical stress on the bar and mount has been minimized further.

All hose connections are safely protected in the harvester head frame. There are no hoses or cables in the saw box at risk of being damaged by twigs, underbrush or a thrown chain. The JPS rotary actuator has no external moving parts so its unaffected by ice, hardened snow and miscellaneous debris. For the harvester operator, this means increased productivity thanks to fewer interruptions to clear the saw box. Additionally, the absence of a cutting cylinder obviously means there is no cylinder rod can be bent as a result of undue loads or external effects.

The smart design of the JPS rotary actuator and its lack of protruding parts make it easy to mount in different harvester heads. As standard, the actuator has a 90° operating angle, but this can be extended to 135° for special applications. The rotary actuator is completely sealed against water and dust. JPS rotary actuators feature an integrated swivel joint with dedicated lubricant and hydraulic oil channels.

The saw motor is mounted as a separate unit, therefore there is no need of any oil channel or swivel joints, which simplifies and speeds up motor replacements. The JPS rotary actuators have been designed for standard motors to allow quick access to a new replacement in cases of unfortunate motor breakdown. 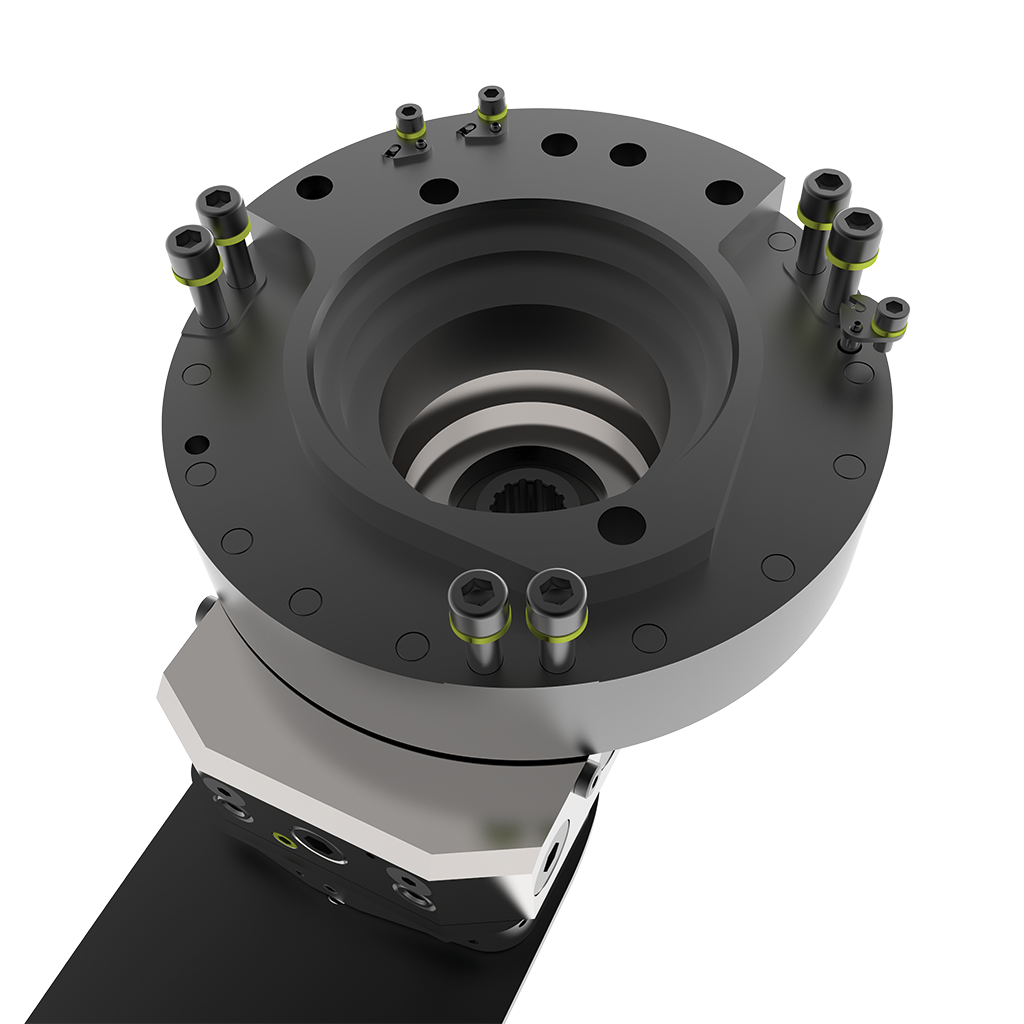